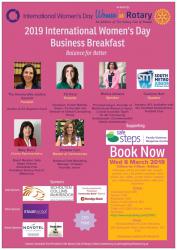 Through your attendance you will help us raise funds and create awareness about Domestic Violence.

Attendees will be provided with a hot plated breakfast and the following:
- Fresh fruit juices
- Apple & almond bircher muesli
- gluten free cereals
- gluten free banana bread
- Greek style yoghurt w/ fruit compotes
- dried fruits and nuts
- seasonal fruits
- freshly brewed coffee and Dilmah teas
Speakers
The Honourable Justice Zammit (Panelist). Justice Zammit is a Judge of the Trial Division of the Supreme Court of Victoria. Justice Zammit graduated from the University of Melbourne with a Bachelor of Laws with First Class Honours in 1995 and began her law career as a solicitor with Minter Ellison in 1996. She was appointed as an Associate Judge of the Supreme Court in 2010 and as a Justice of the Supreme Court in 2015. Justice Zammit is the the fifth solicitor and the first Associate Justice to be appointed as a full Judge of the Supreme Court of Victoria in 163 years.  Justice Zammit is a passionate soccer fan.
Tal Karp (Panelist). Tal is an Olympian, former Matilda, lawyer and now, a co-founder and Director of Sixfold Consulting Group. Tal has held a variety of senior legal practice, policy and strategy roles over the course of her career, including with Victoria Legal Aid, the Sentencing Advisory Council, the Department of Justice and the Victorian Minister for Women and the Prevention of Family Violence. Tal is a graduate member of the Australian Institute of Company Directors, a ‘Change our Game’ Ambassador for the Victorian Government and an appointed Director of YMCA Australia. Tal previously served on the Board of Football Federation Victoria as an elected Director.
Molina  Asthana (Speaker). Molina is the Principal of Swarup Asthana Lawyers and was a Principal Solicitor with the Victorian Government Solicitor's Office (VGSO) for over 10 years. Molina is the first Indian on the board of the Law Institute of Victoria. She is also the President of the International Law Association Victorian Chapter, Deputy Chair of the Law Institute of Victoria International Law Section Committee, an office bearer of the Asian Australian Lawyer's Association, Victorian Convener of the Asian Australian Alliance, the co-chair of the Women in Business Chapter of the Australia India Business Council and also sits on the board of a few community organisations working on diverse issues facing the Asian Community. Molina  speaks on SBS Hindi radio regularly on legal issues of interest to Indians living in Australia. She is a Commissioner for the AFL South East Commission and on the AFL advisory Committee for multicultural engagement. She has formed an Indian Think tank of AFL Multicultural Ambassadors for AFL's engagement with the Indian Community in Australia and with India. She is also a Cricket Australia 'Sport for All' Community Ambassador and  Commonwealth Games Ambassador. Molina is the founder of the organisation Multicultural Women in Sport which aims to empower migrant women from multicultural backgrounds through sport.Molina has received a number of awards and recognitions in Australia and India for her legal, business and sport involvement. She was profiled in the Top 50 of the Indian Community in Melbourne in 2012, 2013 and 2014.
Caroline Hart (Speaker). Caroline is an armature AFL Footballer with the Caulfield Grammarians Football Club.
Mary Barry (Charity Representative). Mary is a Board Member of Safe Steps Victoria. She is an experienced executive across a number of diverse sectors. Most recently she was the CEO of Our Watch and prior to that the National CEO of the Heart Foundation of Australia. Her experience also encompasses that of CEO of the Victorian State Emergency Service (8 years) and the Victorian Association of Health and Extended Care (7 years).  Mary is also the Immediate Past President of the Rotary Club of Melbourne of which she has been a member of for over 13 years.

Add to My Calendar